The Black Panther was an independent publication and the official newspaper of the Black Panther Party between 1968-1973. The newspaper was an effective and entertaining way to get the news of the party out to its members and the public and covered everything from calls to action to op-ed comedy pieces. When it came to print design, The Black Panther really brought something to the table, and no one was more central to “the look” than

Emory Douglas. I selected Douglas and his printmaking to focus on because he is somewhat the unsung hero of “the look” of the movement previously mentioned. Fortunately, it’s relatively easy to find information on him, his prints, as well as online copies of the paper thanks to successful archiving of the Panther’s legacy. One quote about Douglas that really speaks to me is:

He used the newspaper’s popularity to incite the disenfranchised to action, portraying the poor with genuine empathy, not as victims but as outraged, unapologetic and ready for a fight.

Douglas grew up in Bay area of California, he was trained in print making during a youth program in a prison’s print workshop. Though his style and aesthetic really spoke to the readers, what was key to his illustrations was portrayal. Douglas’s portrayal of the historically “militant & cool” Black Panthers put a huge feminist emphasis on strong and resilient women panthers & even children in the movement. This subject matter gave the art and the party a more welcoming appeal by putting inclusivity at the forefront of their graphic design. 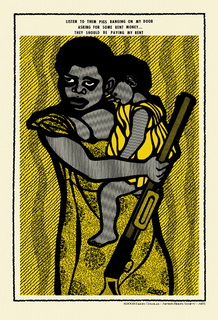 Print by Emory featuring an armed mother and her young child.

Listen to them pigs bangin on my door asking for some rent money… They should be paying my rent.

This art captured not only the feel of the movement, but also gave the greater public a glimpse of the beauty of the struggle & the hope of Black Liberation an era that called for militant self-defense. One of the party’s main goals involved addressing police brutality, this would often take the form of “pig” comics that satirize the animalistic stupidity that goes behind prejudiced policing. Douglas’s pieces reflect a party where men & women were on equal footing in terms of membership and where self-defense was taken seriously, an idea somewhat far-fetched for the time but presented in an empathetic way.

Emory Douglas truly teaches us that artists can make the difference in a movement by dedication and portrayal alone. We can also take away the lessons of making room for people with different strengths and see  what it looks like in action. The party’s commitment to a “bring what you have to the movement” mentality is what made the writer and artist contributors to The Black Panther so visible—and the newspaper such a success.

For further reading check out:

The Black Panther is available online to read for free (below)!