The Syrian Refugee Crisis has been a globally controversial topic as a surge of newcomers are seeking asylum in developed countries, with some having a hard time settling and adjusting into their new environment. Because of the magnitude of this problem, our group decided to help Syrian refugees in our own way by starting a clothing drive for individuals within our local community.

Since 2011, the civil war in Syria has left millions of Syrians displaced from their homeland. The war has completely taken over and left the country in inhumane conditions, leaving these individuals vulnerable and limited in resources. Families have had to flee and seek safety in neighboring countries as well as overseas to the United States. This process is extremely difficult in itself due to the surrounding legal issues. However, many of these people have to go from place to place with very little personal belongings to keep with them, including clothing. The lack of such a basic necessity makes our project valuable. 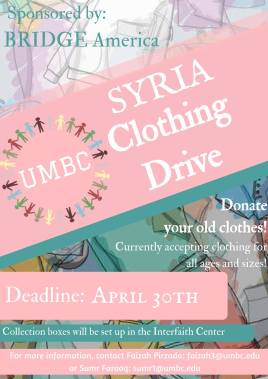 There are a variety of organizations within the area that are currently collecting donations, monetary as well as other items, to benefit refugees who are currently settling in the United States. The organization we chose to work with was BRIDGE America, a small volunteer-based organization, who works specifically with Syrian refugees in the DMV area. Our group collected clothes by creating flyers and advertising on social media describing where and why we were collecting donations. We set up collection boxes in the Interfaith Center on campus and labeled them, allowing people to drop off the bags of clothing for us to pick up and store afterwards. We were also able to take our efforts off-campus by telling our neighbors, friends, and co-workers about our drive which led to a sizable increase in the amount of donations we received.

After collecting the clothing, we sorted through and organized the items by type and size. We collected over two-hundred items of clothing and accessories during the duration of our drive. After our deadline date of April 30th, we brought the clothing to a volunteer and manager of BRIDGE America who took the donations to the organization’s warehouse where the clothing would be distributed to the local Syrian refugees.

Through this process, we also got a sense of what is most effective and what can be more challenging to accomplish when planning a project like ours. We initially wanted to set up a booth on campus to inform people and collect the donations, but securing a location in time made this difficult to do so. However, we found that our method of having ongoing donation boxes was more successful because we were able to collect more donations in the weeks that we had our boxes placed. We also planned to set up boxes in nearly every building on campus but were not able to get the permission to do so. Instead we were only left with the Interfaith Center which still provided a good amount of donations.

Working with other organizations and groups that have already been established made our project more successful. Teaming up with BRIDGE America provided us with a space to distribute our donations and sharing our flyer with groups on campus, like the Muslim Student Association, helped make our efforts more widespread. In terms, of future projects, we believe planning for more time and working with more people could increase the success of our efforts.

This activism project has greatly influenced the way we look at activism. We realized that activism simply means getting out there and being an involved member in your community to bring about change. Our project was done by only 3 people and with our combined efforts, we collected a substantial amount of clothing to help the Syrian families in our community. Individually, this project taught us several valuable lessons about activism including the fact that one can incorporate activism into one’s day-to-day activities. We all also hope to continue to work with and donate to BRIDGE America in the future. Change does not need to come from a large group of people or with a lot of time and money invested but rather focused individuals who deeply care about the issue and are willing to make a change. These small actions have the power to accumulate into something greater.

While we would have liked to have been more directly involved in the distribution process of getting the clothing to the families, there was a large turnout of donors and we were unable to distribute all of the clothes on our own with the little time we had left. BRIDGE America has a network set up of individuals in our community who are in need and it was much easier and faster for them to distribute these clothes.

This project sparked conversation about the crisis which was beginning to lose recognition due to the simple fact that it did not affect the Western world. Many people who donated inquired about ways they could continue to get involved with BRIDGE America or other local organizations that work directly towards helping Syrian refugees. It is easy to feel overwhelmed and helpless about an issue that is so global and beyond our individual control. However, our local contributions can have a significant impact on the individuals who are affected within our own community and we are glad that we had the opportunity to play a part.

For information on how you can help, please visit BRIDGE America at: @Help.BRIDGE.America

Check out these organizations who are making a difference! https://www.rescue.org/united-states/silver-spring-md