Our thoughts going in were to talk to UMBC Residential Life, with the hope of convincing them to change their policies. When we finally got in touch with Reslife and had our first meeting, we discovered that the Gender Inclusive housing system had evolved drastically over the years and currently mirrored the functionality that we had intended to shape it into. We offered our potential services to Reslife, but even so, we found ourselves at a loss of how to proceed.

However, we realized that despite having gone out of our way to find information, none of us had any accurate perception of how the Gender Inclusive housing system worked, and that this was a serious issue. Thus, we switched gears and went from a goal of changing the system to finding a way to broadcast the information about Gender Inclusive housing at UMBC, both so that people searching for information would be able to find it, and also so that those who were unaware of it would be able to see it as an option. However, we needed to have another meeting with Reslife to solidify all of the information we had and make sure we would not be circulating misinformation.

At this point we hit another roadblock, as the use of virtual forms of communication such as e-mail lacked the pressure of urgency that person-to-person contact would have, and so we waited for a fairly long time for responses from those who we had contacted, which we ultimately never received. Finally, we opted for a more urgent approach and started contacting Reslife staff by phone and in person, so that we could set up another meeting.

Finally, we succeeded. We had a meeting with another member of the Reslife staff, who solidified the information we had. Additionally, we proposed the several means of circulation we had been discussing. Before this point, we had been creating a Facebook page that would hopefully host the information that we gleaned from our meeting, that we hoped to be able to pin to the top of the Facebook page dedicated to the incoming class of UMBC Freshmen and Transfers, as the housing selection for returning students had, unfortunately, recently passed.

Reslife then directed us to Admissions, who informed us that the page would not exist until after all of the incoming Freshman and Transfers had already chosen housing (some time early next Fall). We resolved to follow up with admissions in the Fall, however, in the meantime, there was still action we could take. We decided to create a flier with information on Gender Inclusive housing that Reslife could make available at their booths at the orientations over the summer, and also distribute to the Residential Communities’ desks, so that perhaps it could catch the attention of those who were unaware of it. Finally, we urged Reslife to update their information page on Gender Inclusive housing to include the whole picture of the updated information.

Over the course of our project, we learned a lot about organizing and participating in activism. Our relationship with activism changed, as we were now organizing an activist project instead of participating in activism someone else had organized. From our initial attempts at communication with Residential Life, we learned that a phone call or in-person meeting is more effective than an email. Sending an email meant relying on Reslife to then turn around and reach out to us, which did not end up working out. We were not able to schedule a meeting until we called Wendy Crowe in Reslife to do so. When we went into our meeting with Wendy Crowe, we learned that our information source (the Reslife website) was more outdated than we thought. In fact, we found out that many of the changes we intended to discuss with Reslife were already underway. This taught us that we do not always have correct information, but also that that does not mean the project needs to be abandoned. By switching our focus, we learned the importance of finding out where you can make a difference. For us, that meant making a facebook page, creating and proposing an information flyer about GIH, and bringing the outdated information on GIH found on the Reslife website to their attention. As a result, our understanding of activism shifted from being mainly focused on protests and making demands. We enjoyed our experience and plan on continuing to expand our project in the future. 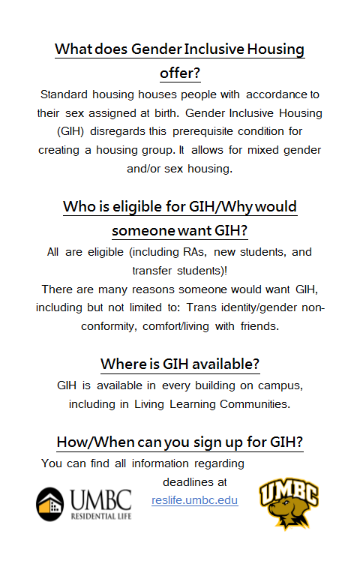